Back in the early 90s, I made the big jump from local BBSs and FidoNet relays to the crazy world of America Online. Within six months or so I was helping manage the Mac Beginners Help Desk (itself an interesting study in wacky). During the couple of years I spent there, I met a really wild assortment of fascinating people: it was my first taste of the eye-opening crazy that everyone now takes for granted on the net. 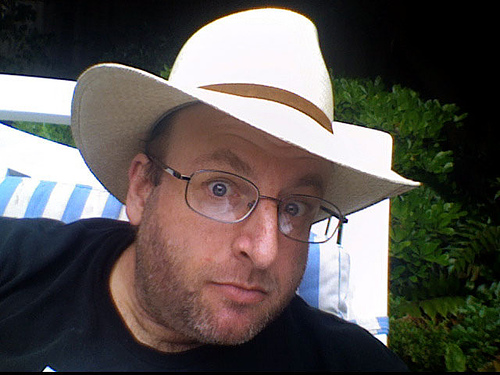 One of the regulars in AOL’s virtual staff lounges was a guy named Conrad. He was a Guide – one of the people that patrolled AOL’s chat rooms helping out the confused and booting troublemakers back in the days when humans did that. We bantered about theology, exchanged horrifyingly bad puns, and he would share crazy-ass stories about his job doing tech stuff for a hospital in LA.

Eventually I climbed out of AOL’s gravity well and sprang for a dialup PPP account; Conrad was one of the people that I lost regrettably lost touch with.

A few years ago, a random friend-of-a-friend’s post on LiveJournal led me to a few entries by someone with a familiar wry style. Lo and behold: Conrad! We chatted, and caught up, and I had the rare chance of getting back in touch with someone I thought I’d never cross paths with again.

Today, his writing is an equal mix of bizarro links, thoughtful and intelligent writing about literature and culture, day-in-the-life posts about the quirky LA scene, and anecdotes from his curiosity-filled past. Stories from the 80s LA punk scene? Yup. Humorous tales of LA gang randomness? Of course. Startlingly moving accounts of the art scene past? Yeah, that too.

Conrad’s one of The Good Folks. It’s cliche, and all that, but to me he’s one of the people that makes the Internet worth having. Without it I’d never have met him, and I would be the lesser for it.