There’s not really a good segue into the topic of rape, but there are lots of bad ones. A little over a week ago on Metafilter, someone started a thread by linking to a stylized 8-bit animated short called “Trucker’s Delight” – it’s a weird pastiche of Mario-esque gaming references and crude sexuality. The shot’s eponymous trucker spots a pixelated blond in a convertible, and gives chase while indie electronica bloops in the background. Lots of physics-defying obstacles appear, but he “succeeds” in having sex with her against her will.

Other than the slick use of stylized pixel graphics, there’s not much to recommend the video: it’s all scat and violence, all skeezily offensive, and there’s no payoff to make it worthwhile for anyone with a remotely healthy view of human sexuality. The resulting Metafilter discussion thread, and the meta-discussion that took place on MetaTalk, was pretty one-sided but boiled down to three camps going around in circles.

The first two are really just discussions about how an online community should handle offensive content; the interesting one, for the sake of what I’m thinking about, is the latter.

To a large degree, comedy is about the unexpected. You get laughs not by telling people what they expect, but by tweaking their expectations and taking them off guard. That can play out in a lot of different ways, and sometimes it plays out in offensive ways. Shocking taboo-breaking comedy has a long and noble history. Sometimes the offensive in-your-face style of a particular comedian is about passion and an unwillingness to be silenced (see Bill Hicks). Other times it’s about kicking at standards of propriety in order to achieve a sense of ‘realness’ (see George Carlin). Other times it’s an “I’m an Asshole” schtick that lets the comedian set himself up as the butt of the joke.

Which brings us to the question raised in the MeTa thread: why is rape “special?” Why can’t we joke about it? (I’m at a disadvantage answering that question, since I’m neither a victim of rape nor do I have any particular qualifications beyond being highly opinionated. So I’ll tread carefully. Ironically, if anyone reading finds my comments offensive, or if thinks I’m full of it, please bear with me and rather than getting angry, please tell me how you feel. If someone is hurt or angered by what I say, I’d like to understand better and learn from it.)

The first answer is that people do joke about it. And it is offensive. But it does happen. so what is it that makes this particular pixel movie so nasty and ire-inducing? Some suggested that it was the violence: sex plus violence equals offensive, and this short had both in tasteless spades. That’s still missing the point, I think, and zips past one of the fundamental issues that makes comedy such a powerful rhetorical device.

Astro Zombie, in that thread, makes an interesting observation that I think touches on the real issue:

This is a question that keeps coming up: Why is rape privileged, and we can't joke about it, when we joke about all sorts of other violence. But I think that's generalizing violence too much. The Three Stooges pulled each other's noses; they didn't travel to Guyana and poison 900 cultists. Ren and Stimpy slapped each other around, they didn't build gas chambers. Not that rape, Guyana, and gas chambers are completely off-limits for humor, but they're not a good blend with slapstick.... I think there can be ethics in comedy, and one of my rules is that you don't go after people who have already been hurt, you don't re-victimize them by making them the butts of jokes... I suppose an argument can be made that comedy is often used to push boundaries of taste, and I agree with that argument, but I just don't feel its very useful to push on this particular side of the envelope, because when it spills open, bullying spills out.

I think he’s really onto something; what’s offensive isn’t “A joke about rape” but rather “A comical animation in which the protagonist’s goal is to rape an anonymous blond stranger.” And it’s not just about rape, either: distaste for taking-the-side-of-the-offender is something that runs deep. Imagine a couple a couple of the following scenarios:

All of those are offensive, all of those are violent, and all of them are pretty likely to be considered terrible material for posting on Metafilter unless they’re offered up in some larger context. But one is different than the other – the last makes a powerful or privileged person or group of people the ‘butt of the joke’ while the others target those who are already targeted. That doesn’t make it less offensive, and it doesn’t make it inherently funny in and of itself, but it definitely explains why it is different, and why jokes that laugh at rape are generally seen as out of line. One can say that it’s not fair, but I think distaste for kicking those who are already down is not an uncommon human response.

The reason I’m writing about it now, while I should be packing for a flight that takes off in a few hours, is that I just saw Dinosaur Comics’ November 27th strip. for those who don’t know, it’s a daily slice of surrealism in which three clip-art dinosaurs chat with each other about politics, philosophy, and other miscellanea. The strip in question? It talks about insects that rape. 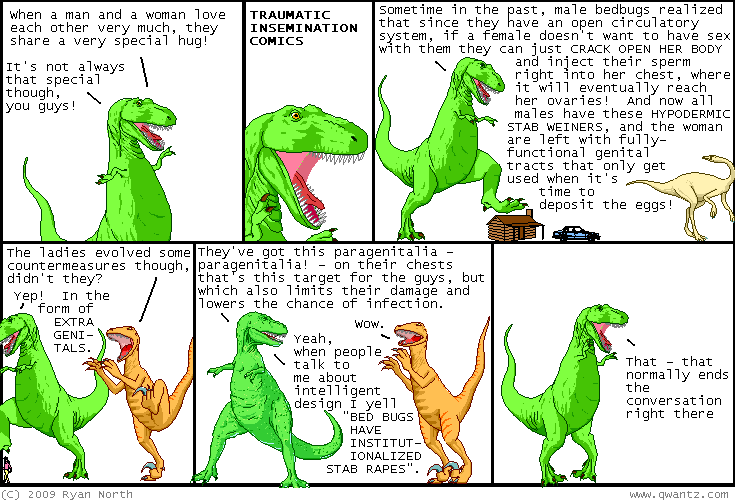 As with a lot of Dinosaur Comic strips, it’s more than a little horrifying and it plays on the idea that T-Rex is absolutely tone-deaf when it comes to interaction in polite society. But there’s an interesting difference between the D.C. strip and the Truckers’ Delight animation: here, no one’s laughing about rape, and violence against a victim isn’t the punchline. T-Rex is horrified by it, and the butt of the joke is anyone who would defend Intelligent Design in the face of such behavior by insects. It’s pointing and laughing at anyone who might say that this is acceptable.

You might not think it’s funny, obviously. And Intelligent Design advocates can say that such mechanisms weren’t actually part of the ‘design,’ and so on and so forth. There’s a dark side to the side-with-the-victim impulse in comedy, too: propagandists and gifted rhetoricians usually start by arguing that the assumed roles of power and oppression are upside-down. The Jews really controlled Germany, the slaves had it easy, Palestinian refugees are really in control of the U.N., etc. Just because someone has the role of a victim or the powerful in comedy doesn’t mean that the dynamic is reflected in real life.

But the potential for abuse only makes the underlying point stronger, I think. Healthy humans don’t want to laugh at the powerless and the victims. Mocking the school reject is bullying: mocking the school bully is well-established material. When we hear someone ask, “Why isn’t that funny? You laugh at lots of offensive stuff!” it’s worth asking whether this dynamic is at the heart. And when someone presents another group or individual as a punch line, ask yourself: am I being asked to kick a victim while they’re down?